Physiotherapy In DelhiPhysioAnatomy of the Nervous system 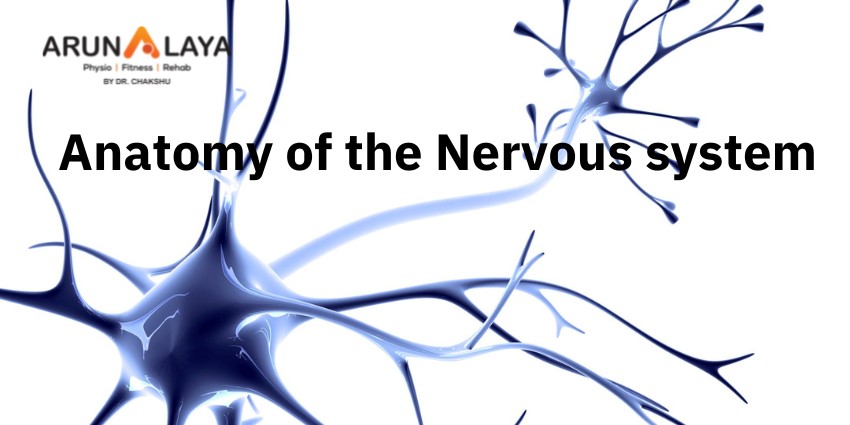 Anatomy of the Nervous system

FUNCTIONAL UNIT OF THE NERVOUS SYSTEM.
Neuron – unit of nervous system
Transmit impulses up to 250 mph.
PARTS OF A NEURON
1) Dendrite – receive stimulus and carry impulse toward the cell body.
2) Cell body – with nucleus and most of the cytoplasm.
3) Axon – fibres which carry impulses away from the cell body.
4) schwann cells- cells which produce myelin or fat layer in the peripheral nervous system
5) myelin sheath- dense lipid layer which insulates the axon.
6) Nodes of Ranvier – These are gaps in myelin sheath.
THREE TYPES OF NEURONS ARE THERE
1) Sensory neurons – beings information to CNS
2) Motor neurons – carry messages from CNS
3) Interneuron – between sensory and motor neurons in the CNS
IMPULSES
1) a stimulus is a change in the environment with sufficient strength to initiate a response.
2) Excitability is the ability of a neuron to respond to the stimulus and convert it into a nerve
impulse .
3) All of nothing rule – the stimulus is either strong enough to start and impulse or nothing
happens
4) Impulses are always the same length along a given neuron and they are self propagation .
Once it starts it continues to the end of the neuron in only one direction from Dendrite to cell
body to axon.
5) The nerve impulse causes a movement of ions across the cell membrane of the nerve cell.

● SYNAPSE – small gap or space between the axon of one neuron and the dendrite of another .
It is junction between neurons which uses neurotransmitter to start the impulse in the second
neuron or an effector. The synapse insures one way transmission of IMPULSES.
●Neurotransmitters – Chemicals in the junction which allow IMPULSES to be started in the
second neuron.
Components of REFLEX ARC
A) Receptor – reacts to stimulus
B) Afferent pathway – conducts impulses to CNS
C) Interneuron – consist of one or more synapses in the CNS
D) Efferent pathway – Conducts impulses from CNS to effector .
E) Effector – muscles fibers or glands responds by contracting or secreting a product.
Spinal reflexes – initiated and completed at the spinal cord level. Occur without the involvement
of higher brain centers.
●CENTRAL NERVOUS ZONE
1)Brain
Brain stem –
•medulla ,
•pons, midbrain
•Diencephalon – thalamus and hypothalamus
•Cerebellum , cerebrum
2) spine
•Spinal cord

MENINGES
Meninges are the three coverings around the brain and spine and help cushion, protect and
nourish the brain and spinal cord.
1) Duramater is the most outer layer
2) Archanoid mater is the middle layer and adheres to the duramater and has web like
attachments to the innermost layer, the pia mater.
3) pia mater is very thin , transparent but tough and covers the entire brain .
4) Cerebrospinal fluid which buffers, nourishes and detoxifies the brain and spinal cord , flows
through the subarachnoid space , between the arschanoid mater and the pia mater.

• Regions of the brain
1) Cerebellum – coordination of movement and aspects of motor learning
2) Cerebrum – conscious activity including perception, emotions,thought and planning
3) Thalamus – filters and then relay information to various brain regions
4) Medulla – vital reflexes as heartbeat and respiration
5) Brainstem – medulla, pons, midbrain and relays information from spine to upper brain.
6) Hypothalamus – involved in regulating activities of internal organs,monitoring information
from the autonomic nervous system, controlling the pituitary gland and its hormone , regulate
sleep and appetite.

• CEREBRUM – Its the largest portion of the brain encompasses about two third of the brain
mass. It consist of two hemispheres divided by a fissure called corpus callosum.
It includes
• the cerebral cortex ,
• the medullary body,and
• basal ganglia.
• cerebral cortex – it’s the layer of the brain called gray matter as it has cell bodies and
synapses but no myelin.
• Medullary body – is the white matter of the cerebrum and consist of mayelinated axons
• Basal ganglia- they are the gray matter in each hemisphere which are involved in the control of
voluntary muscle movement.

Three layers –
Outer layer consists of sclera and cornea
Middle layer consist of choroid, ciliary body and iris
Inner layer consist of retina
Sclera – A tough protective layer of connective tissue that helps maintain the shape of the eye
and provides an attachment for the muscles that move the eye.
Cornea – the clear, dome shaped part of the sclera covering the front of the eye through which
light enters the eyes.
Anterior chamber – is a small chamber between the cornea and the pupil.
Choroid layer – middle layer of the eye containing many blood vessels
Optic nerve – the nerve that transmits electrical impulses from the retina to the brain.
Retina – sensory tissue that lines the back of the eye. It contains millions of photoreceptors that
convert light rays in to electrical impulses that are relayed to the brain via optic nerve.
Lens – a crystalline structure located just behind the iris . It focuses light on to the retina.
OUTER EAR & EAR CANAL – brings sounds into eardrum.
Eardrum – vibrates to amplify sound and separates inner and middle ear
Middle ear has 3 small bones anvil, stirrup, stapes ( amplify sounds ) which vibrates sound.
Eustachian tube – connects middle ear to throat and equalizes pressure on eardrum
Cochlea – has receptors for sound and send signal to brain via auditory nerve.

Taste and smell
Taste buds – the mouth contains around 10,000 taste buds, most of which are located on and
around the tiny bumps on your tongue . Every taste buds detect five primary tastes.
1) sour
2) sweet
3) bitter
4) Salty
5) umami – salts of certain acids
Each of your tastebud contain 50 -100 specialized receptors cells.
Sticking out of every single one of these receptors cells is a tiny taste hair that checks out the
food chemicals in your saliva. Each taste hair responds best to one of the basic tastes.

Smell receptors or olfactory receptors
1) humans are able to detect thousands of different smells
2) olfactory receptors occupy a stamp sized area in the roof of the nasal cavity, the hollow space
inside the nose.
3) tiny hairs are covered with mucus
4) olfactory hairs easily fatigued so you do not notice smell.
5) if a smell , formed by chemicals in the air , dissolves in the mucus , the hair absorbs it and
excite your olfactory receptors .
6) smell leave long lasting impressions and our strongly linked to your memories.

Skin receptors
Most of your touch receptors sit close to your skin’s surface.
Light touch – Meissner s corrupslces are enclosed in a capsule of connective tissue.
They react to light touch and are located in the skin of your palms, soles, lips, eyelids ,external
genitals and nipples. These areas are particularly sensitive.
Heavy pressure – paccinian corrupslces sense pressure and vibration changes deep in your skin .
Pain – skin receptors register pain, pain receptor are the most numerous
Temperature – skin receptors registers warmth and cold. Each square centimetre of your skin
contains 6 receptors for cold and one receptor for warmth. Thermoreceptors are found all over
the body , but cold receptors are found in greater density than heat receptors – most of the
the time of our environment is colder than our body temperatures. The highest concentration
of thermoreceptors can be found in the face and ears so your nose and ears always gets cold
faster than the rest of your body on a chilly winter day